Top 10 places not to be missed in and around Lima

Be inspired to 10 must-see places not to be missed on your visit to and outside Lima, Peru.

Lima? Doesn’t it matter that Lima is a totally unattractive city that you just land in and travel out of as soon as possible?”

If you have heard this statement about the hardly positive reputation of Peru’s capital – then stop here before you make a big mistake. Lima is not unattractive! On the contrary, Lima – and the Peruvian Pacific Coast – is well worth a visit!

Peru’s capital, Lima, with a population of just under 10 million, could not be more beautiful. It’s located off the Pacific coast, which adds to its natural beauty.

Lima has earned its reputation as an unattractive city, a city that works for many as a stopover. However, Lima offers a wealth of fascinating culture and history, great architecture, interesting museums, and world-class gastronomic experiences.

This location in Peru is also on UNESCO’s list of World Heritage.

In this article, you can read a little more about 10 surprising and different places that can offer you a jaw-dropping experience inside and outside of Lima, along with the Peruvian Pacific Coast.

Number 1 on the list is the heart of Lima, Plaza Mayor. The square, also called the Plaza de Armas, is Lima’s central square and dates back to the city’s founding in the mid-1500s.

It was the Spanish conqueror, Pizarro, who founded the city in 1532, making it the most important city in Spanish-colonized South America. Therefore, Lima’s old town is popularly called La Ciudad de los Reyes, which means the City of Kings.

However, a major earthquake in 1746 left the city, and Plaza Mayor, totally in ruins. Only a little over 1,000 people survived out of the city’s 50,000 inhabitants.

The only thing left on Plaza Mayor after the earthquake was the bronze fountain in the middle of the square from 1651, which can still be seen to this day. From the conception of Plaza Mayor in 1532 up to this day the location has been a focal point of the city.

Apart from the attractive bronze fountain that can catch your attention, Plaza Mayor is surrounded by administratively, architecturally, and historically important buildings. These include: 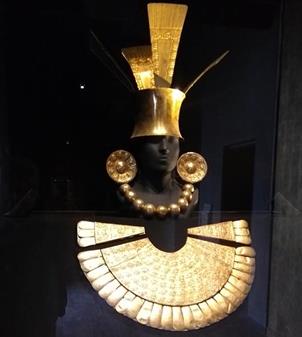 If you are interested in archeology, don’t miss a visit to the Museo Larco.

In a mansion built in the 18th century, originally inhabited by the colonial vice-king, you will find the largest pottery collection in Lima.

You will also find gold and jewels at the museum, and – in the surprising department – pre-Columbian erotica, which covers all sorts of sexual activity.

There is even a booth where the theme is sexually transmitted diseases.

Like so many other major cities, Lima is divided into a handful of different neighborhoods. One of these neighborhoods is Barranco, which you absolutely have to make your way through when you visit.

Barranco is the neighborhood of artists and writers filled with small charming and colorful houses, cafes, galleries, and craft shops.

The neighborhood is Lima’s smallest and is perfect for leisurely activities, where you just let the randomness and curiosity carry you around – you will surely find something truly great.

4. Allow love to run freely in the Parque del Amor 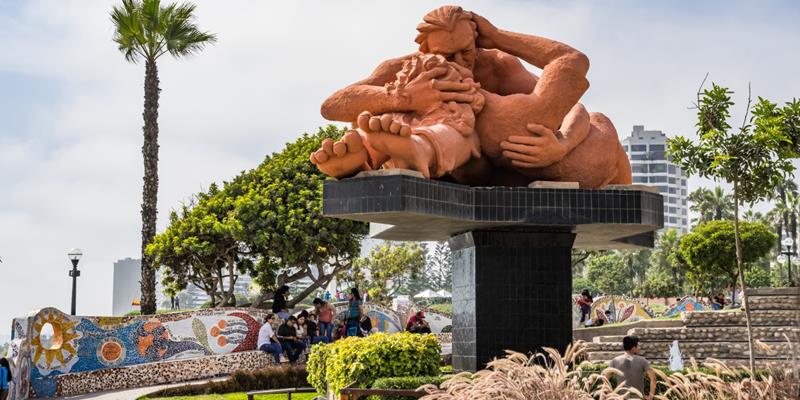 Miraflores, is an another popular and more modern neighborhood, with stunning views of the Pacific Ocean.

Take a walk at the Parque del Amor and take in the beautiful and quirky mosaic bench inspired by Gaudí’s Güell park in Barcelona.

The Love Park, was opened on February 14, on Valentine’s Day, in 1993, for the purpose of paying tribute to love in all its forms. This is most evident in the park’s central sculpture, El Beso (Kiss).

If you are into great gastronomic experiences, a visit to Lima will definitely get your mouth watering. For six consecutive years, Peru has won the World Travel Awards’ for the best culinary destination.

Eat, for example, at Bar El Cordano, just across from the Presidential Palace, a restaurant that, since 1905, has served virtually all of Peru’s presidents.

If you are looking for a good meal in beautiful surroundings, take a visit to the restaurant at La Rosa Nautica, located on a pier off the beach.

Be aware that you can rarely just arrive to these restaurants, so be sure to book a table well in advance.

Traveling north from Lima, up to the country’s northern coast, you will find some of Peru’s most popular beaches, which especially attract locals from all over the country during the hottest months of the year, December and January.

Take, for example, Máncora, a quiet little coastal town that most of all loves its sandy beaches, the good surfing opportunities, wale wtching, swimming with giant turtles or enjoy freshly prepared seafood and high sun and summer all year round (the equator is not too far north).

It is not difficult to fall in love with this relatively unknown – and not too overcrowded – place. So if you are into the good things in life, without all the fuss, then Máncora is the place for you.

The best way to travel to Mancora is by plane to Piura with LATAM or Peruvian Airlines or to Tumbes with LATAM.

Further travel towards Mancora is by bus, where Cruz del Sur is probably the best and safest bus company in Peru. They have departures with so-called sleeper buses (bus-cama) between Lima and Máncora.

On the other hand, if you’re traveling south from Lima, which is what most Peru travelers do because it’s the road to Colca Canyon, Lake Titicaca and Cusco, don’t miss a boat trip around the Ballestas Islands. Also called Mini-Galapagos or more jokingly, Peru Poor Man’s Galapagos.

This place is exceptionally rich in animal wildlife – and trips to it are for many a lot more affordable than those to the well-known Galapagos Islands.

Around the islands, with their rock caves and natural vaults, you will also see guano (sea bird droppings) remains. They have historically been used as fertilizers and exported to large parts of the world, including Europe, under the name “Chile Alps.”

In the Ballestas Islands, you will also find one of the largest sea lion colonies in the world. The sea lion was considered by the ancient Moche civilization to be gods and sea spirits, worshipped by the fishermen for protection and the hope that they will provide plentiful catches.

The sea lions often come and play around the boats, and at the right time of day, their deafening barks will be heard from all corners of the islands.

You will also experience Peruvian soles and pelicans living in colonies of up to several thousand birds, as well as the Humboldt penguin, which has been named after the German scientist who discovered it.

If you’re really lucky, you might even be accompanied by dolphins playfully swimming along with your boat to and from the islands.

You can take guided boat trips around the Ballestas Islands. Starting from the fishing village of Paracas, there are many tour agencies that have daily departures by boat at 8, 10, and 12.

8. Chauchilla – The cemetery that (almost) brings the past back to life

Off the coast with its nourishing Humboldt stream, wildlife is rich and diverse. However, if you move just a little inland, you meet the opposite terrain of barren deserts.

Take a visit to the Chauchilla Cemetery in the Nazca Desert, consisting of thousands of graves – yet only 12 of them have been excavated. The special feature of Chauchilla Cemetery is the well-preserved mummies of the Chincha people, which can be seen in the open graves.

The Chinchas lived in the desert during the period 800 to 1400, and thanks to their graves, we have gained insight into the culture and traditions of the ancient people.

The tombs were discovered in the early 20th century and immediately afterward, they were looted by grave robbers who stole valuables such as pottery, textiles, gold, silver, etc. and left mummies, skulls and other tombs scattered throughout the area. Since then, the graves have been reconstructed.

Remember sun hat and sunscreen – the sun is strong in the desert.

Take a guided tour of the Chauchilla cemetery based on Nazca and most often combined with a flight over the Nazca lines (see a little further down).

9. Huacachina desert oasis – a break from the hectic travel life

Worth a visit is also Huacachina, an unexpected natural desert oasis, which is the only one of its kind in all of South America.

Take a stroll through the surrounding sand dunes and enjoy the view of the green oasis. Also, you can meet your need for speed on a speedy drive up and down the dunes in the buggy, giving the adrenaline junkies a good time. If you are even more adventurous, take a sandboarding or MTB tour.

You can also take the bus from Lima to Ica (4-5 hours) and take a taxi from Ica to the Huacachina oasis (about 10 minutes).

10. The Nazca Lines – mysterious remnants of a distant past

The last place you will want to go is the Nazca Lines, the mysterious grid of lines and figures that are scratched into an area of the Nazca Desert of more than 500 square kilometers.

Thanks to the dry desert climate and the almost complete absence of rain, we can still, today, after over 1,000 years, be fascinated by the mysterious lines and figures whose purpose remains unclear.

There is a lookout tower in the area, but from there you can see very little, so book a guided flight tour over the Nazca lines and get the full experience – you will not regret it!

The Nazca Lines, which are technically geoglyphs, consist of about 10,000 lines that cross the desert, and over 70 human and animal figures.

As the figures are so large – for example, the hummingbird measures 97 meters – most of them can only be seen from the air.

Precisely this fact has raised the question of why and for what purpose the Nazca people made them.  At the time of the Nazca people, there were no airplanes, so if they should not themselves benefit from the many characters – who should?

The purpose of the Nazca lines is still unclear, but there are different theories that try to explain the background behind the mysterious lines. Most likely, the people of Nazca used the lines as an astronomical calendar, or they had a spiritual and ritual function. However, there are also other – far more dubious – theories that suggest that the lines should have been used as a way of communicating with aliens.

Still, they are all theories, and the Nazca lines, here 1,000 years later, are still a mystery.

To get to the Nazca lines, you need to take the bus from Lima to Nazca (7-8 hours) with Cruz del Sur, one of the few goods and safe bus companies in Peru (Note: Cruz del Sur spells Nasca with ‘s’).

We can arrange all these activities in a private service only. You can also combine these destinations with Lake Titicaca, Cusco, Machu Picchu, and the Amazon rainforest.

As you can probably see, Lima deserves more than just a quick stop on the journey.

Has my mission succeeded? Is it tickling your fingers to book a flight to Lima right away? If so, which of these 10 experiences do you most enjoy watching? I would love to hear more about that!

I am Boris Rojas is one of River Explorers owners and author of all the texts you find on the website and on social media. With my blog posts, I hope that you will learn more about Peru and be inspired to SELF to start arranging YOUR OWN unforgettable journey to the ancient kingdom of the Incas! See you on the blog, on Facebook, and maybe even "in real life".

This site uses Akismet to reduce spam. Learn how your comment data is processed. 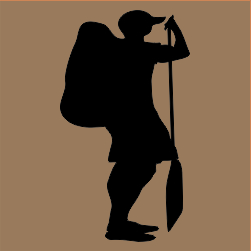